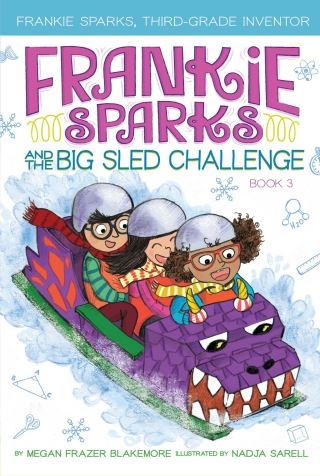 Frankie Sparks uses her inventing skills to build the best sled ever in this third chapter book in the STEM inspired Frankie Sparks, Third-Grade Inventor series.

Frankie Sparks can’t wait to enter the town-wide sled design contest. With the help of a team, she must design and build a sled using only cardboard and duct tape. And there are PRIZES!

Each team in the contest will be judged on:
1. Best looking sled.
2. Fastest sled.
3. Most team spirit.

Even though Frankie might know a lot about building a sled, it turns out she still has a lot to learn about building a team. With lots of twists, turns, and big bumps along the way, can Frankie and her fellow super-sled designers create a dream machine—and a dream team?

Megan Frazer Blakemore: Megan Frazer Blakemore is an author for children and young adults. Her middle grade novels include The Firefly Code, The Daybreak Bond, The Friendship Riddle, The Spy Catchers of Maple Hill, and The Water Castle, the latter of which was named a Kirkus Reviews Best Children’s Book of 2013, a Bank Street College Best Book 2014, a Junior Library Guild Selection, and has been included on numerous state lists. Her books for young adults are Good and Gone, Secrets of Truth & Beauty, and Very in Pieces, which was a Junior Library Guild selection. A school librarian, Megan has a BA from Columbia University, and an MLS from Simmons Graduate School of Library and Information Science. Megan is currently pursuing her doctorate in library science. She lives in Maine with her husband, two children, two cats, a leopard gecko, and (sometimes) a hive of bees.Nadja Sarell is an illustrator living in Helsinki, Finland. She graduated with MA in dance from Theatre Academy Helsinki and graduated from North Wales School of Art and Design with BA in illustration for children’s publishing in 2004. Since then she has worked as a freelance illustrator in Finland and abroad. She loves to teach art, illustration, and dance for both children and adults.