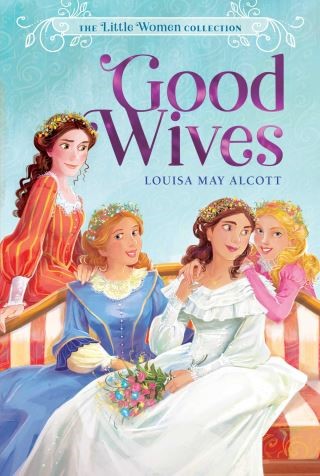 Louisa May Alcott’s enchanting tale of the March sisters continues with this beautiful keepsake edition of Good Wives, the second novel in the Little Women Collection!

The tale of the March sisters continues in the beloved sequel to Little Women, which picks up three years later as Meg is preparing for her wedding, Jo attempts to launch her literary career, Beth still struggles to regain her health, and Amy begins traveling the world with their aunt. But obstacles stand between the girls and their dreams, and they’re forced to confront unimaginable heartache. Through love, perseverance, and family, together they overcome the hardships to find happiness.

Louisa May Alcott: Louisa May Alcott was born in 1832 in Germantown, Pennsylvania. She is best known for Little Women (1968), which is loosely based on her own life and proved to be one of the most popular children’s books ever written. Three sequels followed: Good Wives (1869), Little Men (1871), and Jo’s Boys (1886). Alcott was the daughter of the famous transcendentalist Bronson Alcott and was friend of Emerson and Thoreau. In addition to writing, she worked as a teacher, governess, and Civil War nurse, as well as being an advocate of abolition, women’s rights, and temperance. She died in 1888 and is buried in Sleepy Hollow cemetery in Concord, Massachusetts.